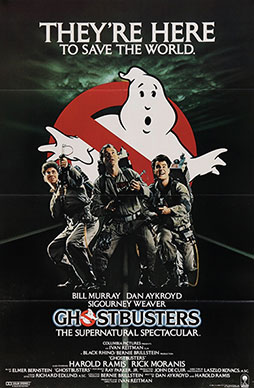 Peter Venkman, Raymond Stantz, and Egon Spengler are paranormal researchers working for Columbia University. After they lose their jobs over a botched ghost investigation in the University library, they establish Ghostbusters, a paranormal investigation and elimination service. They develop quirky high-tech equipment to capture ghosts and open their business in an old firehouse. In their first outing, they capture their first ghost and put it in a custom built containment unit in the firehouse basement. As paranormal activity increases in New York City, they hire a fourth member, Winston Zeddemore, to cope with demand. 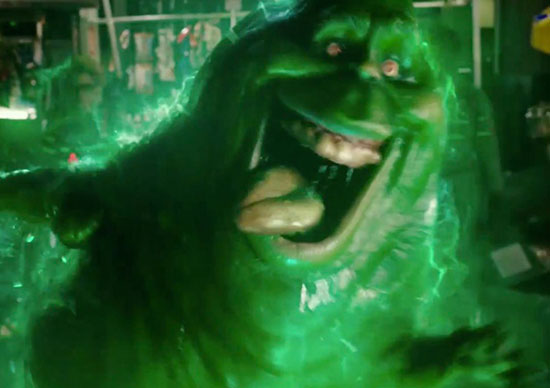 The “green spud” flying around the ritzy hotel, gobbling up peoples’ meals.
The battle scene in the ball room between the spud and the Ghostbusters.
The possession of Sigourney Weaver.
The grand battle at the end with the Stay-Puft Marshmallow monster. 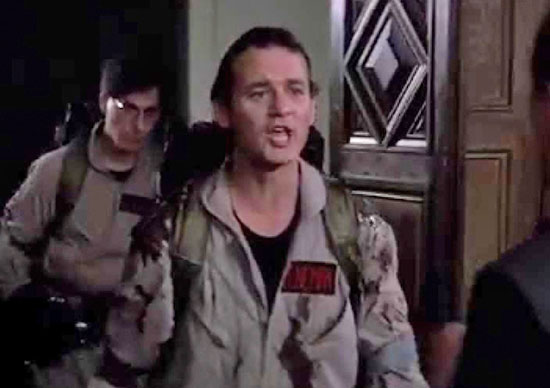 Dr. Peter Venkman: We came, we saw, we kicked its ass!

Dr. Raymond Stantz: Personally, I liked the university. They gave us money and facilities, we didn’t have to produce anything! You’ve never been out of college! You don’t know what it’s like out there! I’ve WORKED in the private sector. They expect *results*.

Thoughts from the HauntedHouses team

Bill Murray gives one of his most endearing performances as one of the Ghostbusters, who overcomes his personality faults to rise to the occasion of defeating demonic entities

Rick Moranis is particularly good as a nerd, with no savior faire, who besides being an exercise and vitamin nut, hosts parties where he invites only his clients, so he can write off the expense.

Who can forget that great theme song, by Ray Parker, Jr.? It’s almost impossible to not like, unless you’re already dead and a ghost yourself.

The film has many ghostly effects. The visual effects are courtesy of Richard Edlund. Toward the end of the movie, after the grid is shut down by the EPA, many ghostly apparitions, vapors, mists, etc. invade the city. A cloudy mist goes up the tailpipe of a taxi and a ghoul is seen driving the taxi, crashing into the side of the street, with a passenger in the back. The coming of Gozer, the demon dogs, the activity in Dana’s kitchen and refrigerator are brought to life with a scary reality.

Some of the premises about ghosts in this movie are the result of a very creative imagination, which add up to to a very entertaining movie. But real apparitions don’t leave trails of gooey, slimy ectoplasm that can be collected & analyzed. Some have been photographed, filmed, and ghosts hunters do use instruments to detect such things as temperature changes. ( NY: The “Gingerbread” Manor House; CA: The Whaley House; UT: Gibbs House )

Ghosts can’t be caught or contained, but most ghosts can be made to leave by exorcism or by help from a medium and /or parapsychologist. ( See WA: Monaghan Hall; NY: Morris-Jumel Mansion; KS: Fort Leavenworth )

While many apparitions, like the one of the elderly lady in the basement of the library, reading, at the beginning of the movie, are clearly seen in detail and do indeed float above the floor, they usually don’t turn into such a scary form that chased the trio of soon-to-be ghost busters out of the library. (See SC: Legare Street House; OR: The Heceta House; IN: The Willard Library; MI: A Renovated House in Grand Rapids ). If they are scary and mean, they usually are always that way toward the living. ( See WA: Monaghan Hall; KY: Little White Flower ).