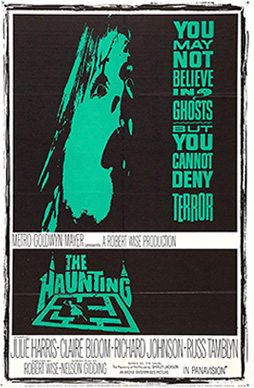 The basic story involves a scientist, who brings a mixed group of psychics and cynics to a supposedly haunted house, said by town tradition, to have been “born bad”. The spooky events that transpire have a profound effect on all of those involved. Without using the blood and gore of today’s horror flicks, Wise creates great tension and some genuine shocks, thrills and spills. With the aid of black and white photography, odd angles, unsettling music and superb acting, “The Haunting” is memorably creepy.

Julie Harris is fascinating as a somewhat mentally/emotionally disturbed woman who becomes unhinged during her stay at haunted Hill House. Because of her mental problems, she was slowly possessed by an evil presence in the house. Under Wise’s astute direction, she gives the kind of performance with which she wowed stage and screen audiences for years.

Russ Tamblyn (West Side Story), gives an interesting layered performance. He makes a credible transition from a wise cracking cynic, to a sober believer in the supernatural. Along the way he has a few moments to show off the dancer’s athleticism he was famous for.

The film benefits from a top notch screenplay, by Nelson Gidding, adapted from Shirley Jackson’s novel, “The Haunting of Hill House.”

If you enjoy The Haunting, you may like: Poltergeist, The Shining, The Others, What Lies Beneath, and The Legend of Hell House.

While no ghost makes a visual appearance, everything that points to a haunted house is present. Unseen presences, mostly angry, evil, disturbed ones, make their presences clearly known to the people staying at Hill House. The characters experience the uncomfortable feeling of being watched, cold spots, hear crazy, insane laughter, running down the halls, door knobs turning, see eyes in the wooden walls watching them, mumbling, loud knocking noises on the doors & walls, bending walls, and even being physically touched by an unseen child presence; as described below in the favorite scene selection. Also, there was writing on the wall with a chalky substance and the character, Eleanor, who perhaps had some psychic medium ability; slowly becomes under the influence of an evil presence in the house. She found it hard to fight against it because of her vulnerability caused by her emotional needs and mental problems. ( See WA: Monaghan Hall; KY: Little White Flower; TX: Catfish Plantation; CA: The Millbrae House Ghost; WI: Cristy Mansion )