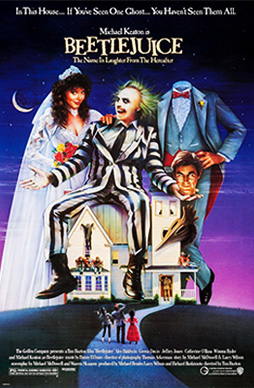 A recently deceased couple make the mistake of calling on Betelgeuse, a renegade, enterprising, shady entity, to evict the annoying living interlopers from their beloved house.

We can say many positive things about this fun movie including: great casting, great performances, great effects, great art direction, and a clever story, that has fun speculating explanations for why ghosts stick around and generally don’t leave their haunted house. “Beetlejuice” offers a fascinating, speculative look at the after life, which involves paper work and a slow working bureaucracy that is employed by people who had killed themselves. Screen veteran, Sylvia Sidney, shines as an overworked case worker, Juno. Even when dead, the script imagines that ghosts have to follow rules set forth by a slow working bureaucracy and a hard to read book, that reads like a stereo manual. In such an inefficient system, what would an unhappy couple do about getting the obnoxious living, the Deetzes, out of their house? They go to the private sector, to a shady entrepreneur — Beetlejuice!!

Michael Keaton, as Beetlejuice, is wildly out of control and hilarious as the ultimate dead pest. He has so much fun with a crazy comedy role like this that it’s easy to see why he didn’t want to keep playing Batman forever. He is “a jangled juggernaut of jokes, jolts and jive.” He hurls one-liners, spins into grotesque, gobbles insects, and just can’t leave the ladies, living or dead, alone.” 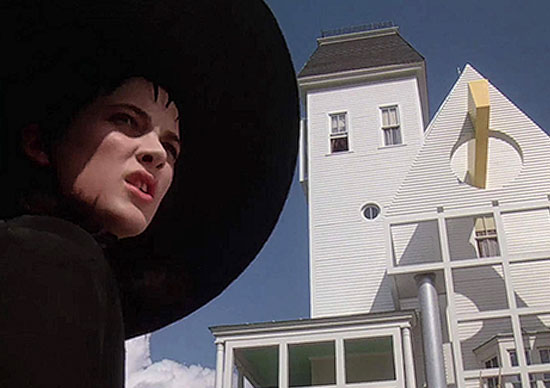 Some of our favorite scenes include: Adam and Barbara’s meetings with their social worker, the scene introducing Beetlejuice, back to the afterlife; all the bizarrely funny faces, Ortho’s seance, “It’s Show time,” and the Epilogue (Jump in the Line). 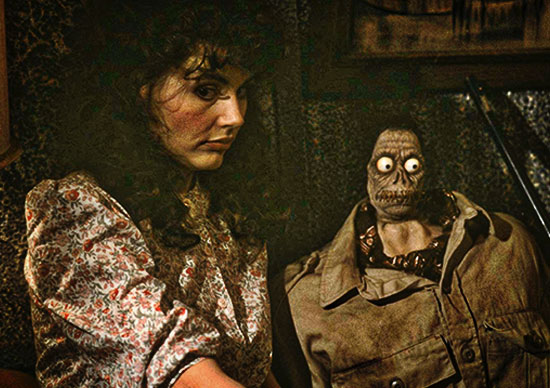 Much of the script is not based on real hauntings and the explanations are brilliantly creative thoughts of Michael McDowel and Warren Skaaron. A more realistic explanation, based on past cases, for the reason why this young couple would stick around is that they died suddenly in an accident, did not want to leave their beloved home and felt they had unfinished business; such as wallpapering, decorating their home, and working on the town map.

The film benefits from a great score by Oingo Boingo’s Danny Elfman; the first of several successful collaborations between Burton and Elfman. The classic calypso music of Harry Belafonte also turns up, to great humorous effect, providing the music for a favorite scene in the movie, where the unhappy pair try to scare the living out of their house with a “parlor trick,” at the Deetzes’ dinner party.

Sometimes ghosts become upset when the living do a major remodeling job on their beloved home or become upset because the living have moved into their home, and start haunting the living to various degrees. (See NH: Admiral Hawly’s House; OR: The Heceta House; TX: The Catfish Plantation Restaurant)

In reality, cases have been reported of ghosts trying to get rid of the living in not so amusing ways. (See NM: Saint James Hotel; MI: A Renovated House in Grand Rapids; NY: The Thayer Home; WA: Monaghan Hall, WI: O’Brien House & The Cristy House).

Other ghosts have been really happy when the living remodel or restore their home, and stick around to watch, become fond of, and sometimes help the living. (See CO: Bradmar Tudor Manor; CA: The Madrona Manor, The Peninsula School).